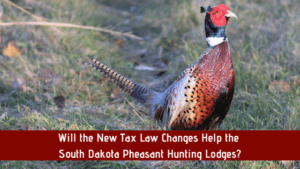 Although the new tax law has some great benefits for small businesses like pheasant hunting lodges in South Dakota, it could also have some greater hindrances. If you’re not familiar with some of the verbiage in the TCJA, here’s our main concern: in the past, a business owner could deduct 50% of any entertainment expense used for entertaining clients, such as a weekend trip to a lodge for pheasant hunting. Under the new tax law, there are no deductions for this type of expense. When corporate customers make up a significant portion of your business, these changes can potentially have a negative impact on the number of pheasant hunting visitors to South Dakota.

So we’re curious as to the decision to support the removal of the deduction by our state’s senator, John Thune, who is part of the tax-writing Senate Finance Committee in charge of the TCJA. According to the South Dakota Department of Tourism, pheasant hunting created an estimated $223 million in retail economic impact annually and an additional $111 million in salaries annually for 2015. In fact, South Dakota pheasant hunting is known around the world, something Senator Thune is well aware of as a pheasant hunter himself. Although the senator has mentioned the many businesses, both large and small, that are already prospering from TCJA, none are in the tourism industry. With all that in mind, was there any consideration as to the impact of removing the entertainment tax deduction would have on the tourism industry for states that have large revenues from it?

Most people don’t realize the impact of tourism on their state or even their local economy. Here’s the impact we found for South Dakota in the 2017 calendar year:

We feel the rushed decision from Senator Thune and the rest of the Senate Finance Committee has left many small tourism-related businesses, like Double P Ranch, in a bit of a conundrum. Although the TCJA may help provide some welcomed tax relief to our business, such as an increase in the dollar limit for equipment purchases, our business could lose revenue from corporate clients because of it. Paying less tax on less revenue does not grow a business. With the removal of the tax deduction for entertainment expenses already in effect, South Dakota’s Pheasant Hunting Industry is going to start to feel the adverse effects of this new tax law sooner than later.